COVID-19 rapid antigen tests: how useful are they? CITF experts evaluate their utility in everyday settings

COVID-19 rapid antigen tests: how useful are they? CITF experts evaluate their utility in everyday settings

Canada has opted to ensure the wide availability of rapid antigen tests for COVID-19. These devices, named for their ability to detect active SARS-CoV-2 infections within one hour, have garnered mixed reviews. Questions remain regarding their accuracy – as they are often self-administered – and their ability to detect asymptomatic infections. CITF experts, Drs. Jesse Papenburg, Matthew Cheng, and Cedric Yansouni from the McGill University Health Centre, as well as Dr. Lisa Barrett from Dalhousie University, have undertaken two distinct studies to evaluate their utility in a variety of settings.

As rapid antigen tests are often self-administered, it is not always certain whether users have correctly performed or interpreted the test. In a not-yet peer-reviewed pre-print, Drs. Papenburg, Cheng, and Yansouni evaluated the adequacy of self-performed rapid antigen tests in various workplaces in Montreal experiencing a COVID-19 outbreak. The tests were deployed to serially screen all employees within a business after the local public health unit alerted the study team of at least two active confirmed cases on the premises. Over the course of four study visits, participants were either guided on how to use the test by trained professionals or invited to self-perform the test with close supervision. Most users executed the procedural steps correctly. However, the researchers found that the accuracy of the user’s interpretation of a test result was dependent on the signal intensity of the band in the testing window; namely, low-intensity bands were more likely to be misinterpreted as negative.

Upon realizing that the ‘Quick Reference Guide’ provided by the manufacturer was not always well-understood by participants, Papenburg et al. created their own ‘Modified Quick Reference Guide’. This modified guide improved result interpretation to a level comparable to that of professional technologists. As employees gradually start returning to the workplace, it is essential to ensure that individuals make correct use of rapid antigen tests if they are to be effectively implemented. Tailored test instructions that clarify the procedure’s crucial steps and help with the interpretation of a variety of results, such as the one developed by Papenburg et al., may be valuable in these efforts. Access the modified guide here.

A separate study in Nova Scotia led by Dr. Barrett directly compared the performance nasal rapid antigen tests and nasopharyngeal swabs (the ones given by professionals that go deeper into the nose). This was conducted at a community-based testing centre for asymptomatic individuals. In this comparative study, the sensitivity Sensitivity is the measurement of a test’s capacity to correctly diagnose a positive result. of nasal swab rapid antigen tests was 88% when compared to nasopharyngeal swabs. Other notable observations include:

Both studies took place in the spring and summer of 2021 and employed the Panbio COVID-19 Antigen Rapid Test Device from the manufacturer Abbott Laboratories.

Many Canadians are now familiar with the procedures involved in performing a rapid antigen test. The graphic below depicts the general steps: 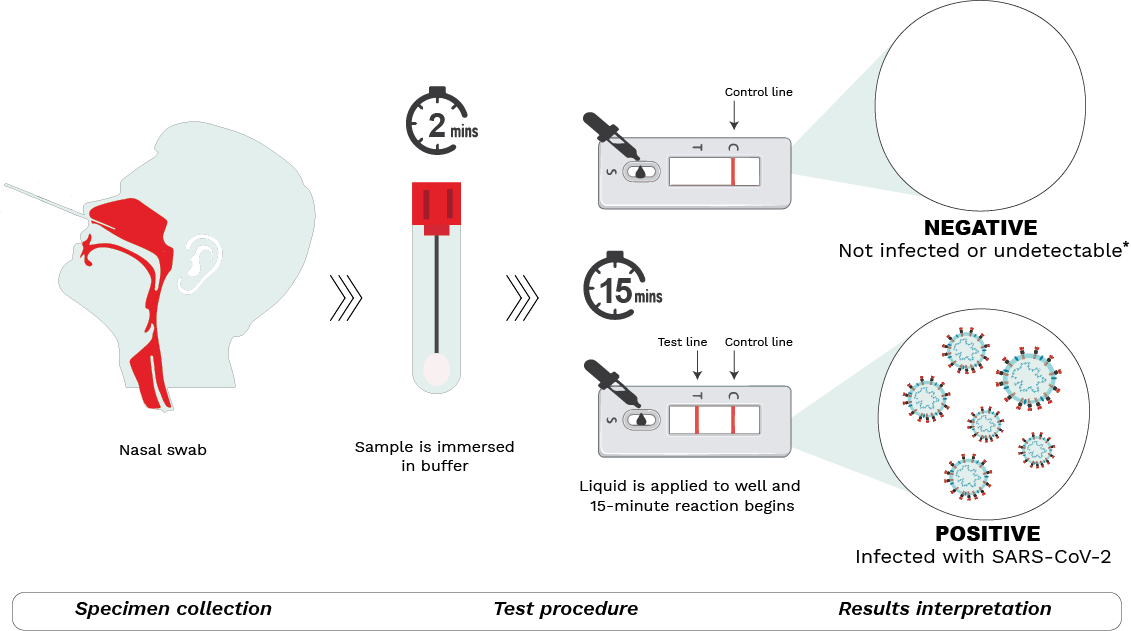 A nasal sample is collected using the sterile swab provided.

The swab is submerged in a buffer solution to extract the SARS-CoV-2 virus (if present). After a rest period, the resulting liquid is dispensed with the aid of a nozzle into the sample well on the testing device. The sample then moves through the testing device during which antigens present in the sample bind to antibodies in the device, forming antigen-antibody complexes. The reaction lasts for 15-30 minutes (depending on the manufacturer’s instructions) after which results may be read.

Two lines detected at the T (test) and C (control) lines of the test window indicate a positive result. This means the sample is positive for SARS-CoV-2 and the person is most likely infected. Positive results can be reported at local/provincial/territorial public health units. If only one line at C (control) appears, the result is negative, meaning that the individual is most likely not infected. *It is important to note however that a negative result may also indicate that a person is infected but below the level of detection. That said, if symptoms are present, individuals should continue to isolate and follow local public health guidelines. The test may be repeated a few days later to re-ascertain infection status. No lines or a faint T line indicates an invalid test.