In order to tailor public health strategies to the current pandemic context, it is important to understand the prevalence of COVID-19 across Canada. Since the winter of 2021-22 with the onset of the Omicron wave, PCR testing for diagnosis of SARS-CoV-2 has failed to keep up with the rapid growth in infection across the population. The CITF has therefore drawn on serosurveillance studies (measuring antibodies due to infection and vaccination in a person’s blood) to provide updated estimates of the magnitude and trends in SARS-CoV-2 infection in Canada.

The seroprevalence estimates presented below are based on data from over 20 studies that can be grouped into three categories: 1) blood donors from Canadian Blood Services and Héma-Québec; 2) anonymized discarded, or residual, blood samples from provincial laboratories; and 3) participants in CITF-funded research cohorts. All three sources contribute important information, but each source has different strengths and limitations.

This analysis uses the presence of antibodies to the nucleocapsid protein as an indication of past infection and the presence of anti-spike antibodies to represent the overall seroprevalence representing both vaccine-induced and infection-acquired antibodies. Prior to vaccine roll-out in Jan 2021, the presence of anti-spike antibodies also indicates past infection. The seroprevalence estimates presented in this report are from three different sources: 1) Blood donors from Canadian Blood Services and Héma-Québec; 2) anonymized discarded or residual blood samples from provincial laboratories; and 3) participants in CITF-funded research cohorts. The data are assumed to provide an assessment of seroprevalence reflecting infection approximately 14 days or more earlier than their collection date, given the time it takes on average for infected individuals to develop measurable IgG antibodies in response to infection.

Data were drawn from projects funded by the Government of Canada through its COVID-19 Immunity Task Force (CITF) and projects that have made their seroprevalence estimates publicly available. The funded projects and engaged partners reflect efforts by the CITF to assess seroprevalence of SARS-CoV-2 antibodies across Canada, as per its mandate beginning in April 2020. The types of projects collecting the data include provincial serosurveys and pan-Canadian studies of the general population, studies focusing on specific age-groups, special, and/or vulnerable subpopulations, and studies in COVID-19 “hotspots”, such as in occupational cohorts.

Academic laboratories used both commercial assays and assays that they developed. These laboratory-developed assays used constructs of the SARS-CoV-2 proteins produced at the National Research Council Canada in Montreal or by other reputable, commercially available sources. Antibody detection was done via ELISA or high-throughput chemiluminescence assays. The development of global standards to help calibrate SARS-CoV-2 IgG 8 assays, Biological Arbitrary Units, has helped to decrease heterogeneity and facilitated comparison of and combination of results. For the nucleocapsid assays, the threshold for prior infection was at the manufacturer’s predetermined cut-off for the assay.

This report describes population estimates of SARS-CoV-2 seroprevalence measured across the course of the pandemic, within three distinct phases based on the predominant variant of concern at the time:

Seroprevalence results were summarized or presented by:

Using a time-series approach with the aggregate-level seroprevalence estimates reported by each project, average seroprevalence over time was estimated using a Bayesian multivariate generalized linear model. The model, appropriate for count data where the proportion positive cannot exceed 100%, used a logit link with beta-binomial distributed errors. The predictors for anti-N seroprevalence included natural splines for the time predictor, and province-specific intercepts and coefficients with partial pooling. Hence, the time trend could vary by province while sharing information across provinces. The predictors for anti-S seroprevalence included natural splines for the time predictor, logit of anti-N seroprevalence, and the number of vaccination doses administered in the last six months per capita by province. The 95% credible intervals were between the 2.5% and 97.5% quantiles of the Markov chain Monte Carlo (MCMC) samples.

The serological assays used are heterogeneous, with different assays using different measurement units. By reporting the proportion of positive samples (seropositivity) we avoid the need to standardize different measurement units. However, it should be noted that different assays have different inherent characteristics (sensitivity, specificity, thresholds), which affect how positive samples are determined. Further, using the nucleocapsid antibody as the indication of prior infection has limitations. These limitations are due to factors such as antibody levels decay over time, low immunogenicity, the inability to know exactly when infection occurred, a lag of one- to two-weeks for maximal antibody generation, and the fact that it is not possible to differentiate between the first and recurrent infections. Consequently, the heterogeneity in estimates has increased during the Omicron era. In BC, for example, the increasing variation in seroprevalence estimates is due to including a broader age range in the source population. In Alberta, the reason for the increased variation in estimates is not currently known, but we are working with the Alberta Precision Labs scientists who contributed estimates from residual blood samples to understand possible reasons. Given these limitations, estimates of seroprevalence should not generally be interpreted as direct measures of cumulative infections over the course of the pandemic. However, absolute changes in anti-N seroprevalence over short intervals (e.g., a few months) are likely to accurately represent sudden increases in infections over the interval.

How do serosurveys work?

Results up to November 30, 2022 | Percentage of Canadians with infection-acquired antibodies exceeds 73%

We estimate this rise in seroprevalence during the Omicron phase of the pandemic corresponds to at least 26 million (95% CrI: 25.2 to 27.5) Canadians being infected between December 1, 2021, and November 15, 2022. The actual number of newly infected (or reinfected) Canadians may have been higher because some people infected early in the Omicron phase of the pandemic may no longer have detectable anti-N antibodies. The infection rate over this eleven-month period is equivalent to about 75,000 infections per day.

Anti-nucleocapsid seropositivity for all age groups, combined, by region 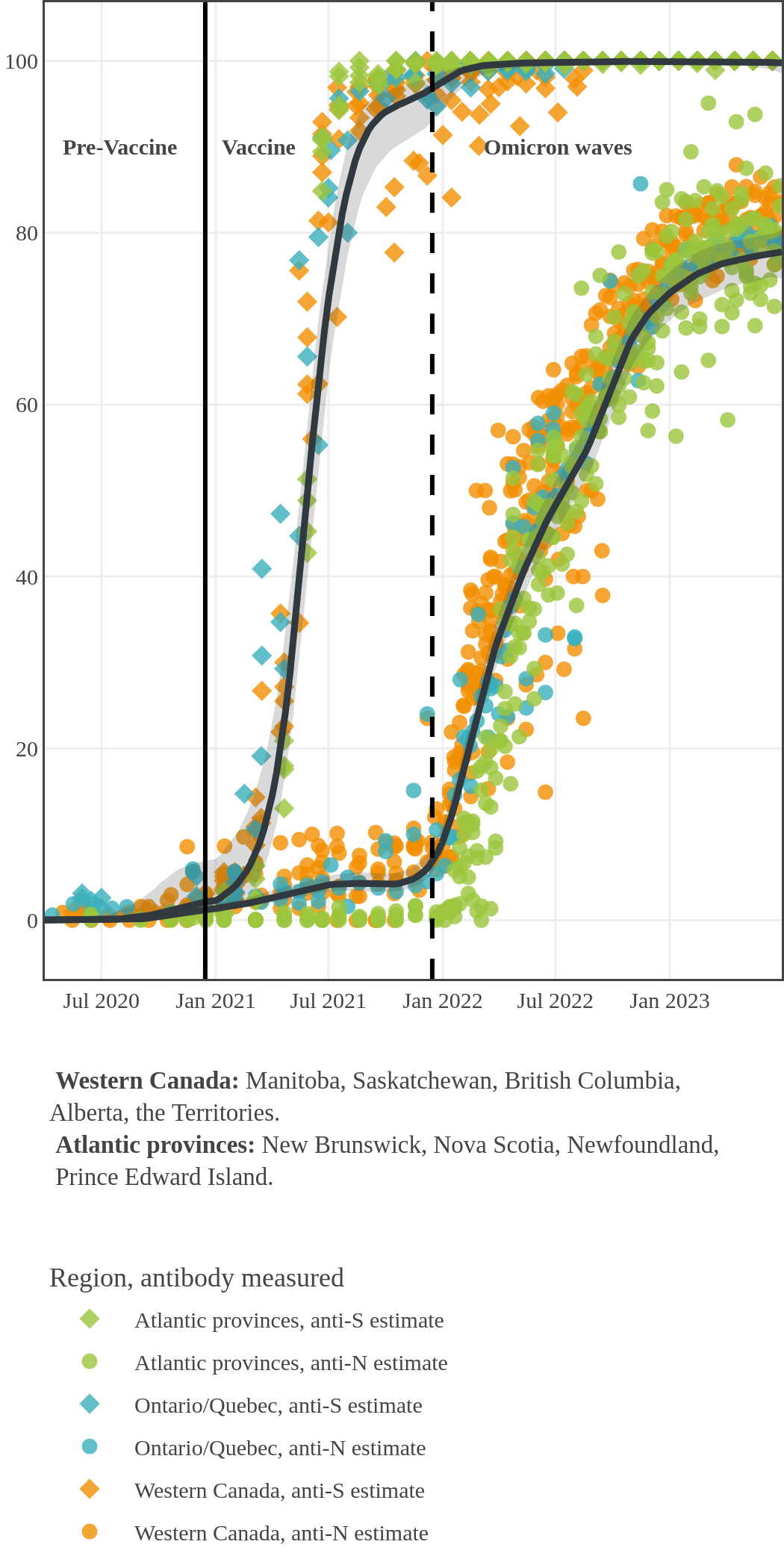 Data notes:
Each point represents a seroprevalence estimate from a project at the mid-point of a sample collection period. The black line represents the estimated average seroprevalence weighted by sample size. The dark and light grey bands represent the 50% and 95% bootstrap confidence intervals, respectively.

The state of infection-induced seroprevalence in Canada

The interactive map below was produced by the CITF Data & Analysis team based on data from about 20 CITF-funded studies or studies that have made their data publicly available. This map illustrates the percentage of Canadian adults with infection-acquired antibodies by the end of November 2022. 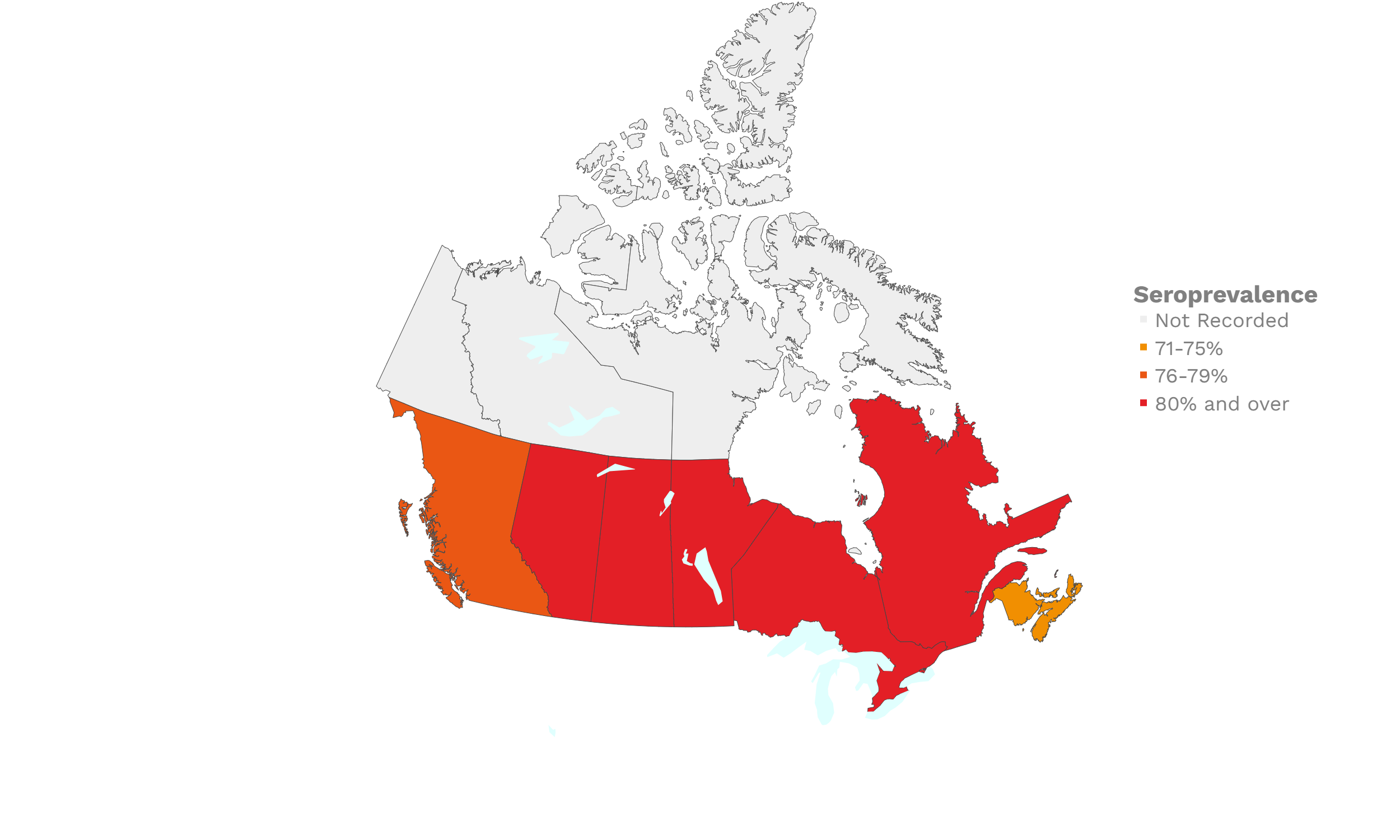 Seroprevalence by province over time

Seroprevalence due to infection during the Omicron waves, between December 15, 2021, and November 30, 2022, continued to increase across all provinces of Canada. The findings from several seroprevalence studies across Canada showed that in the last week of November: 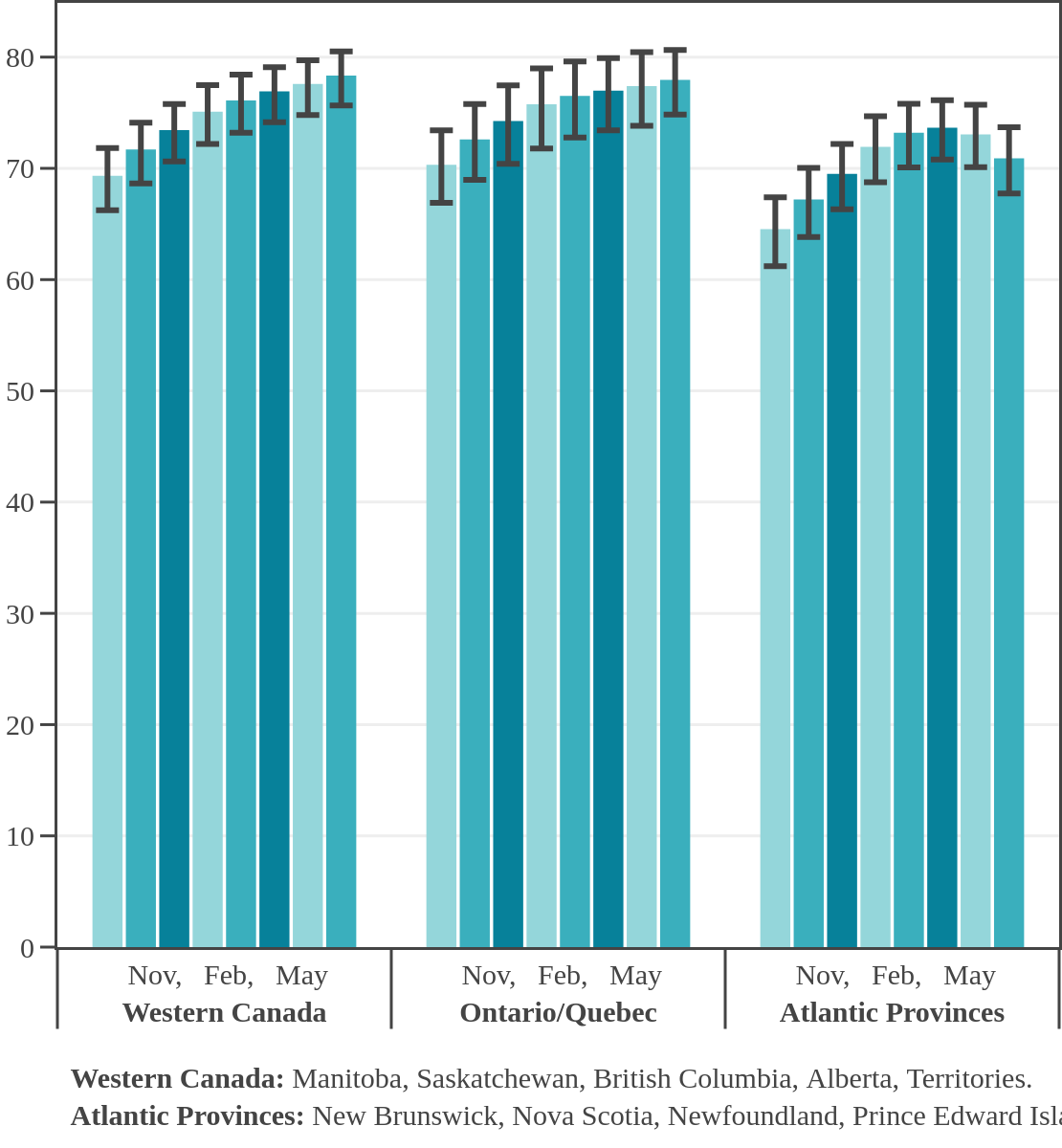 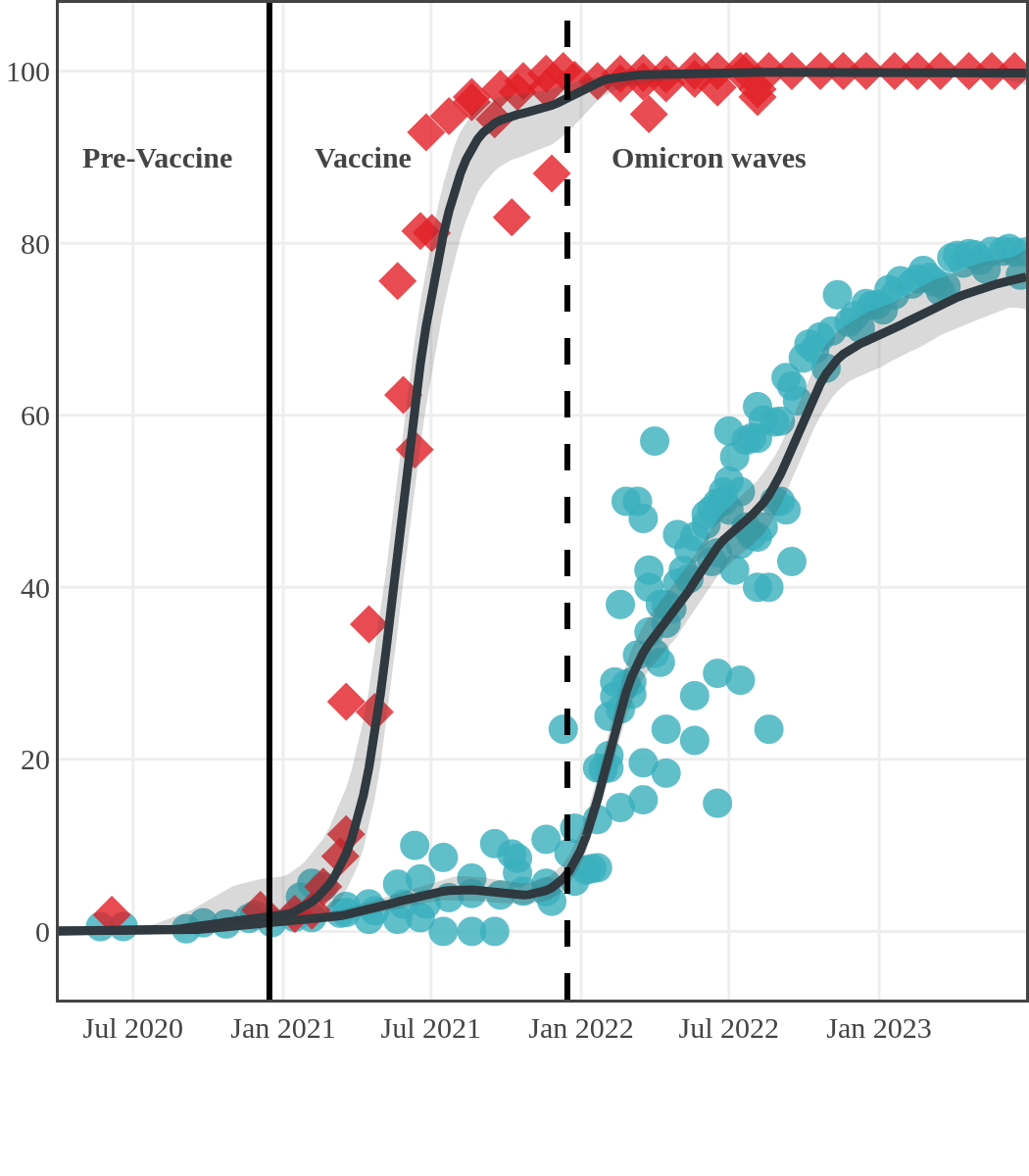 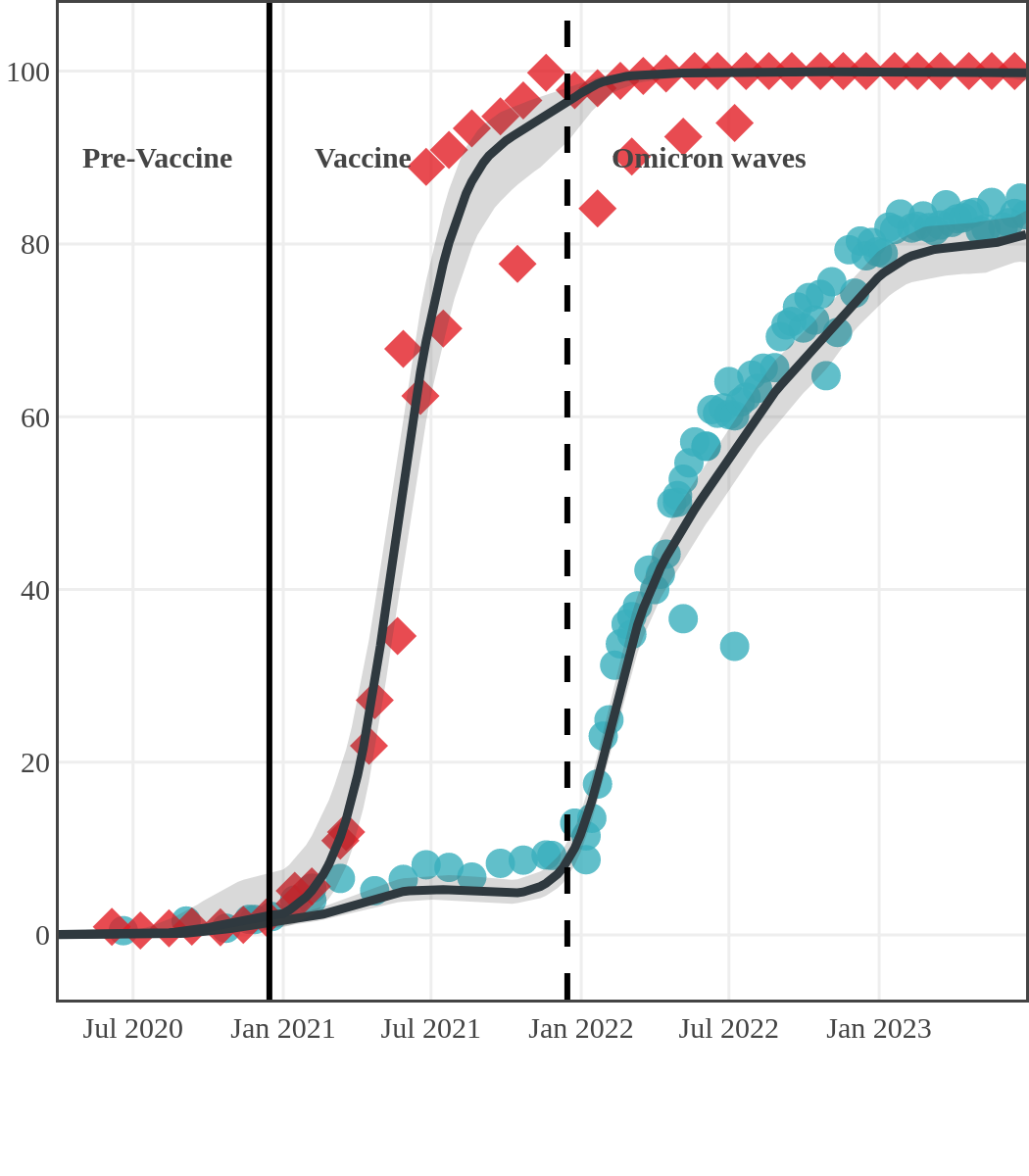 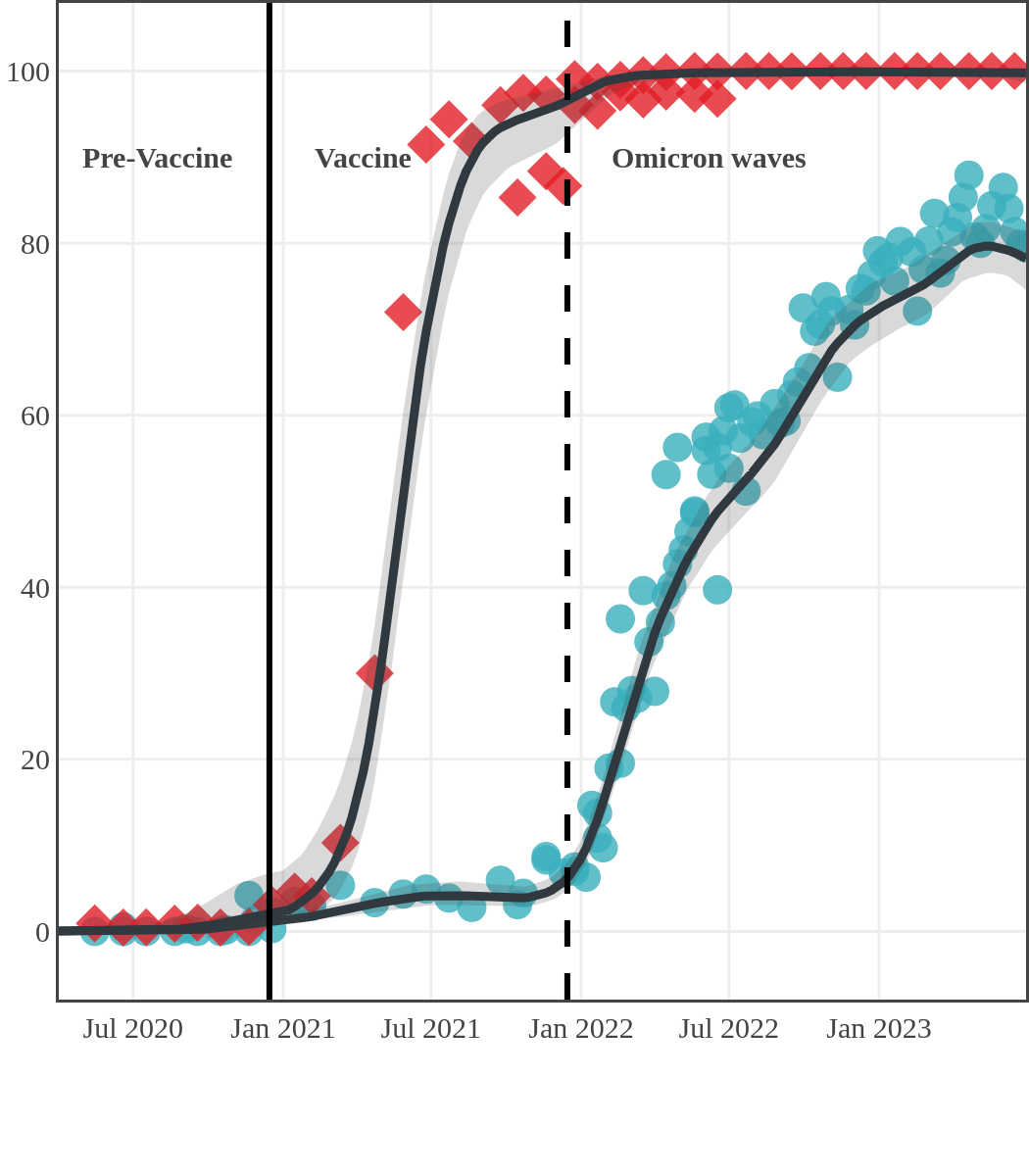 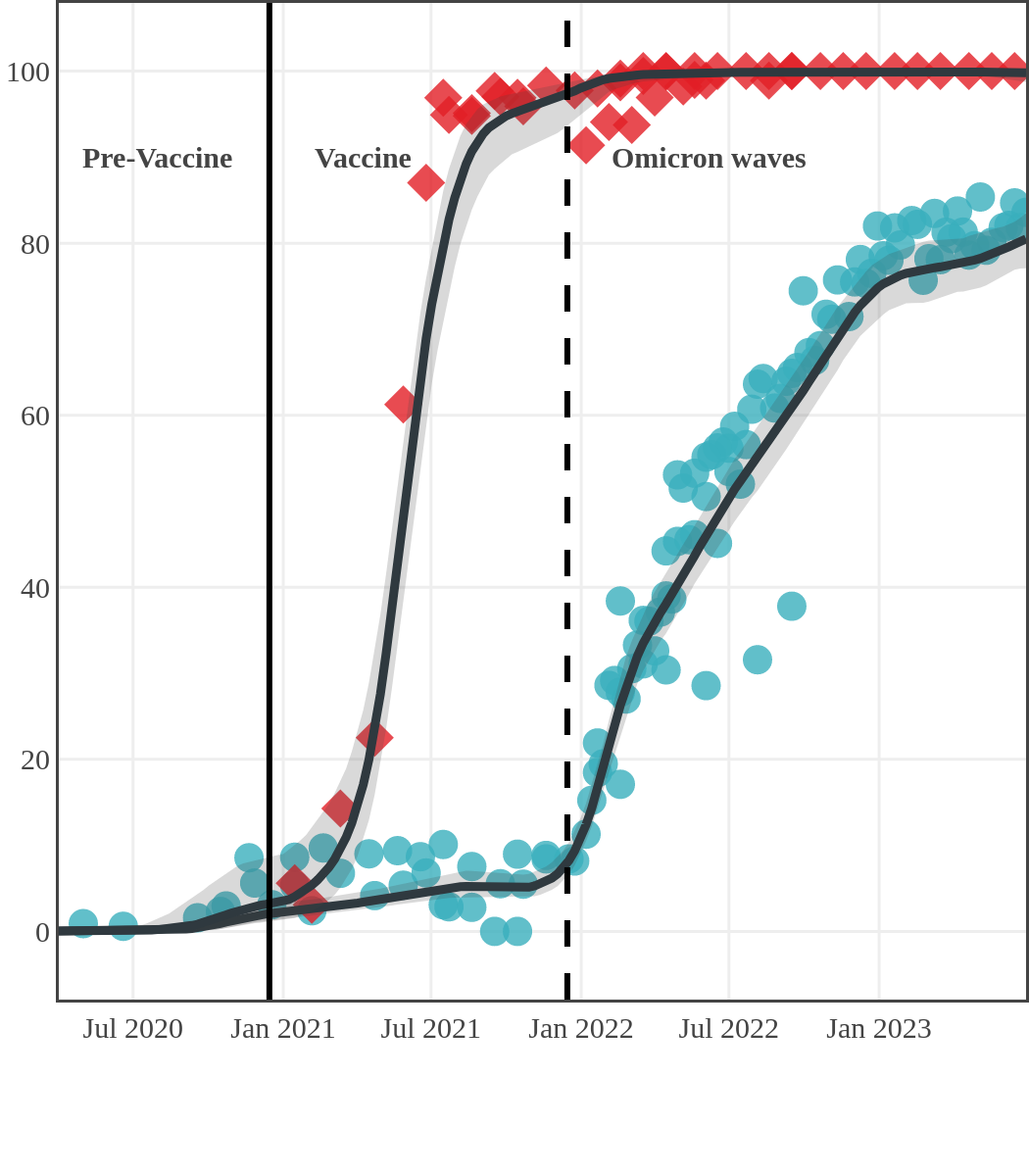 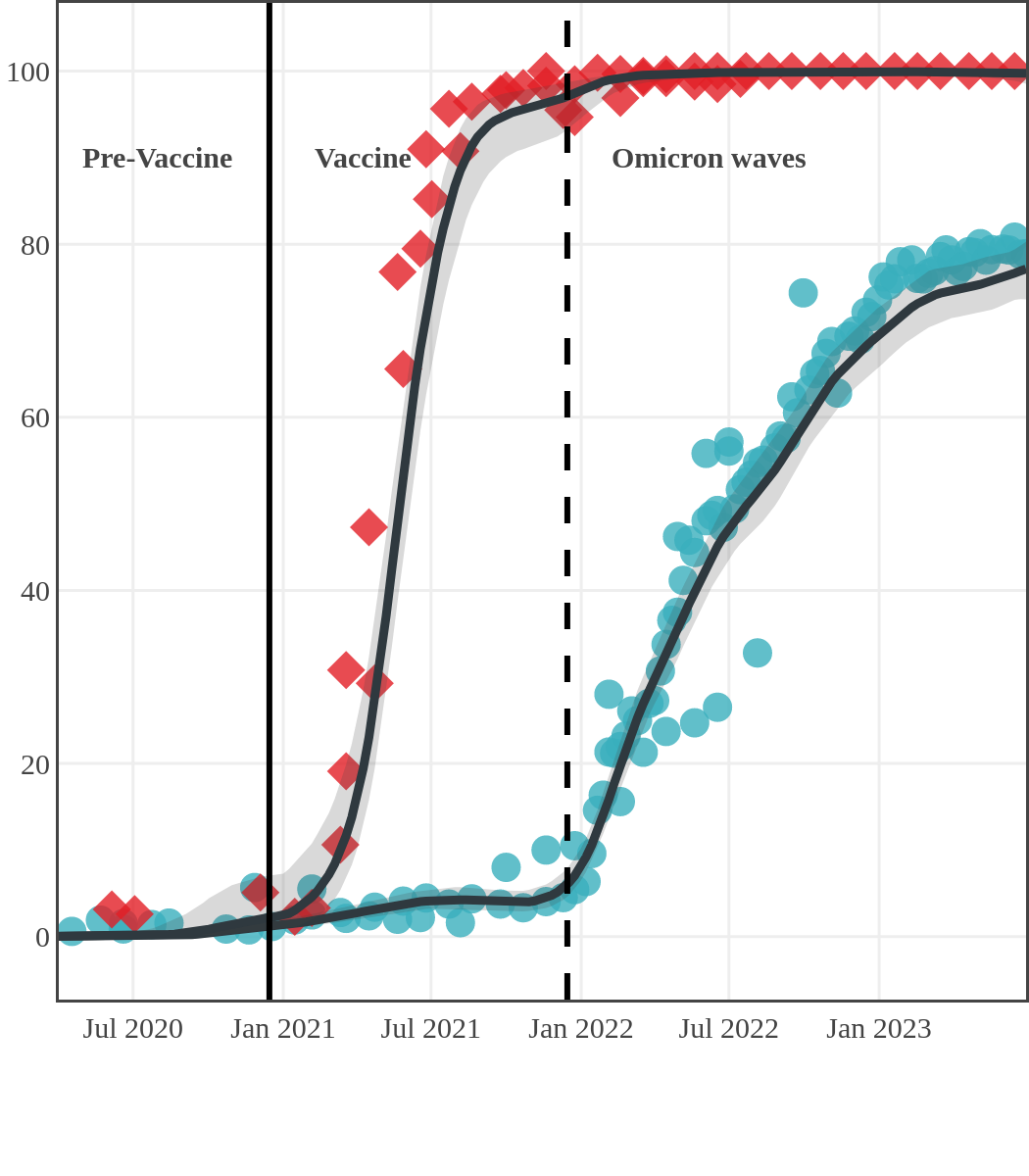 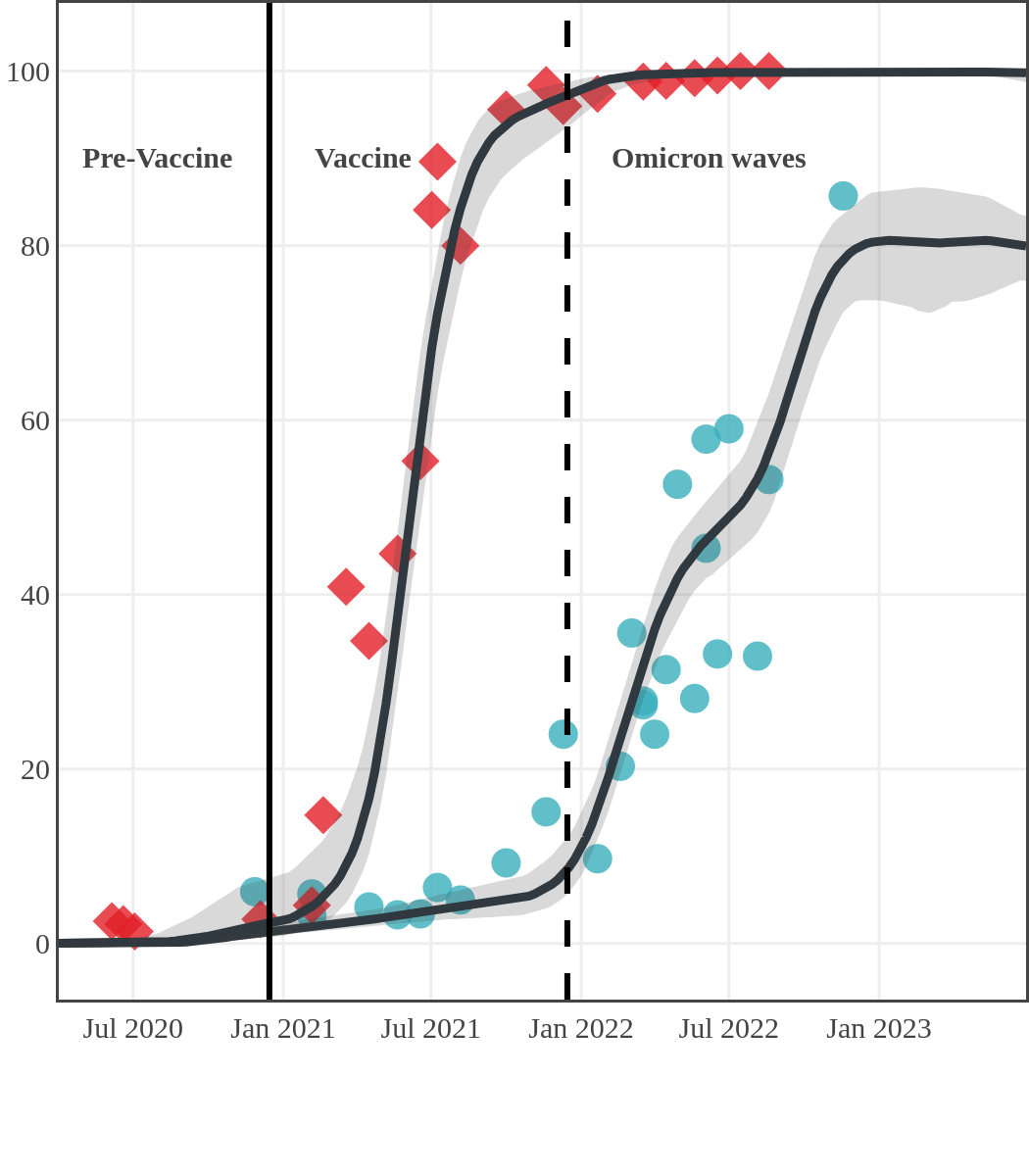 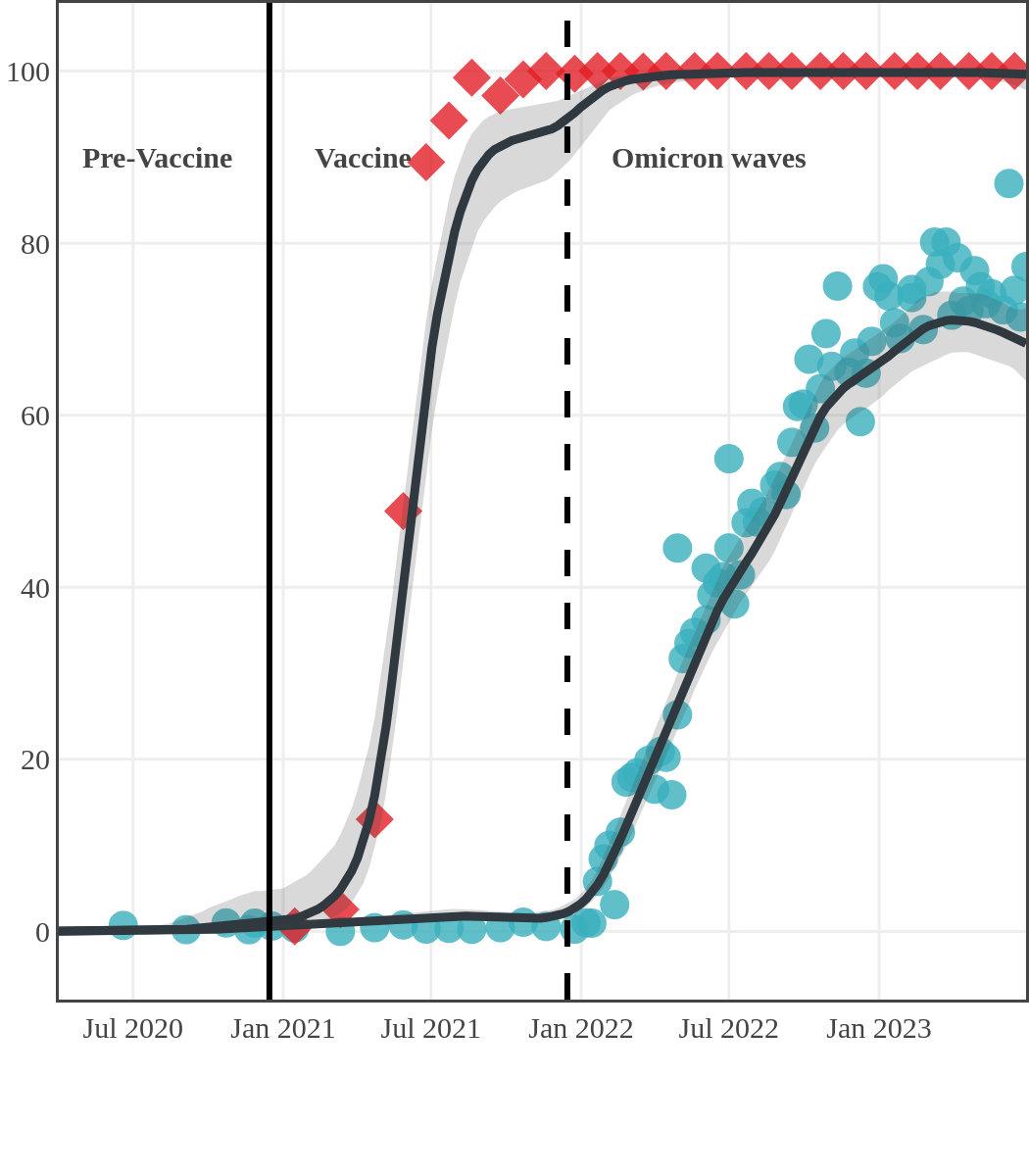 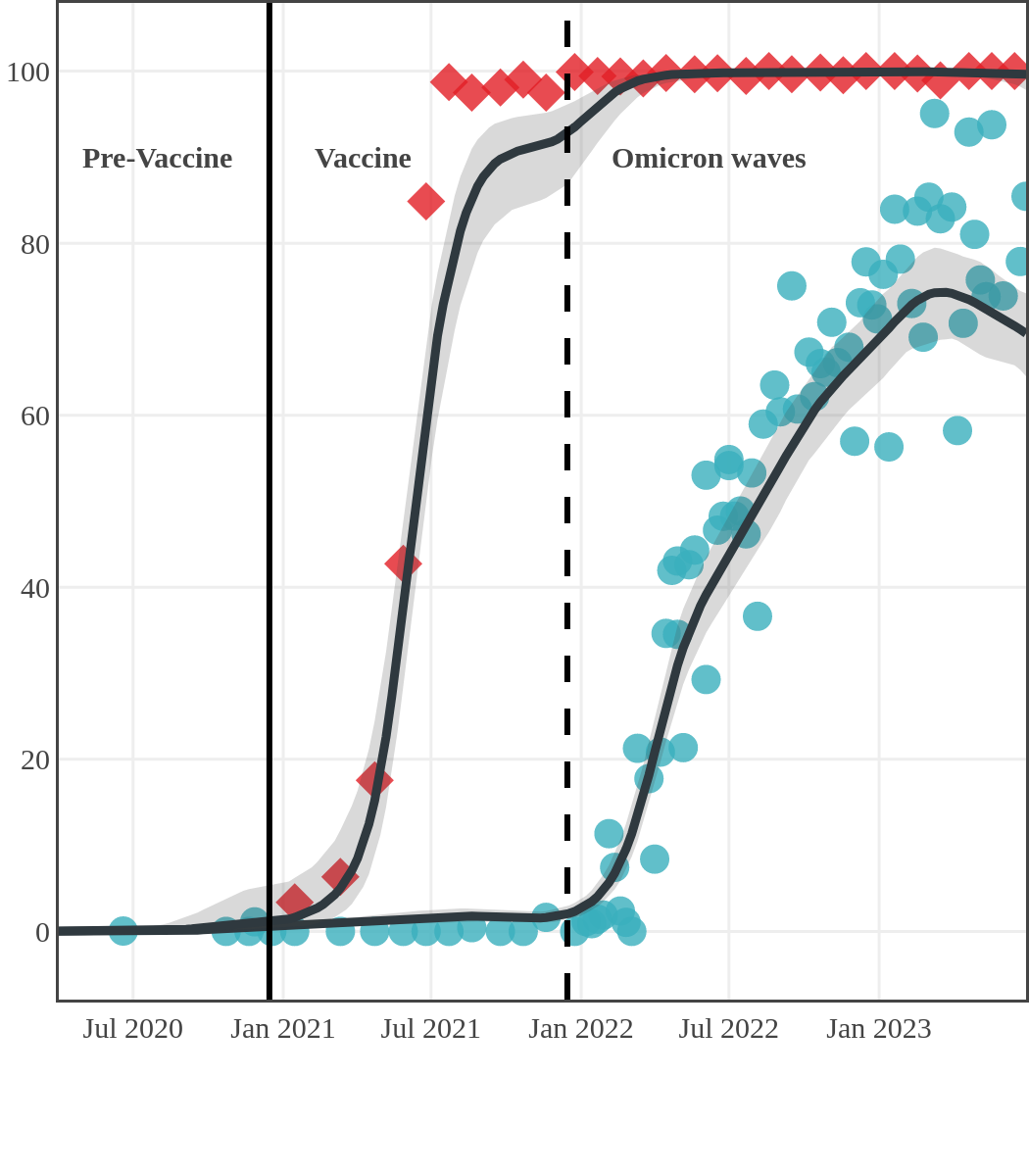 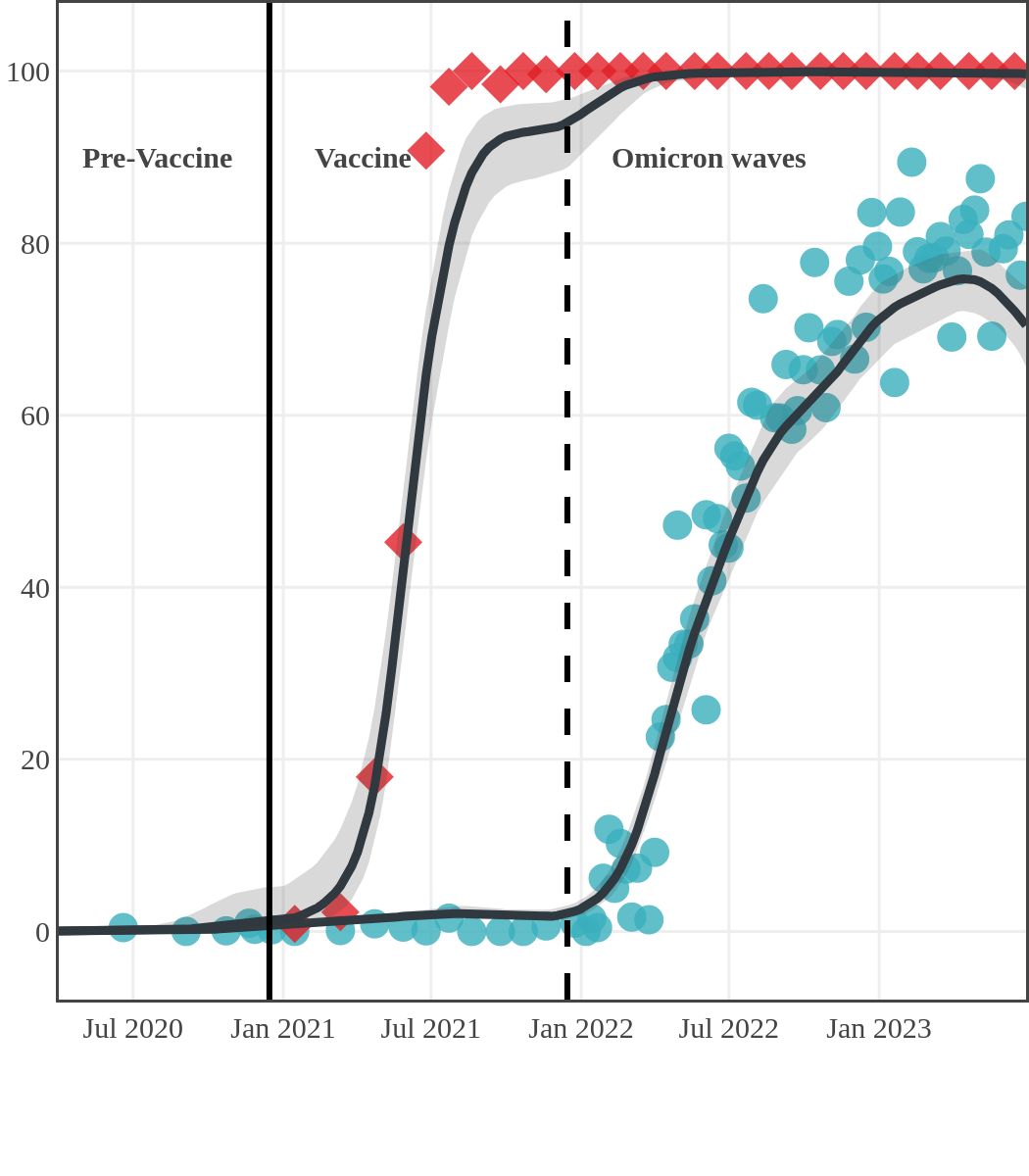 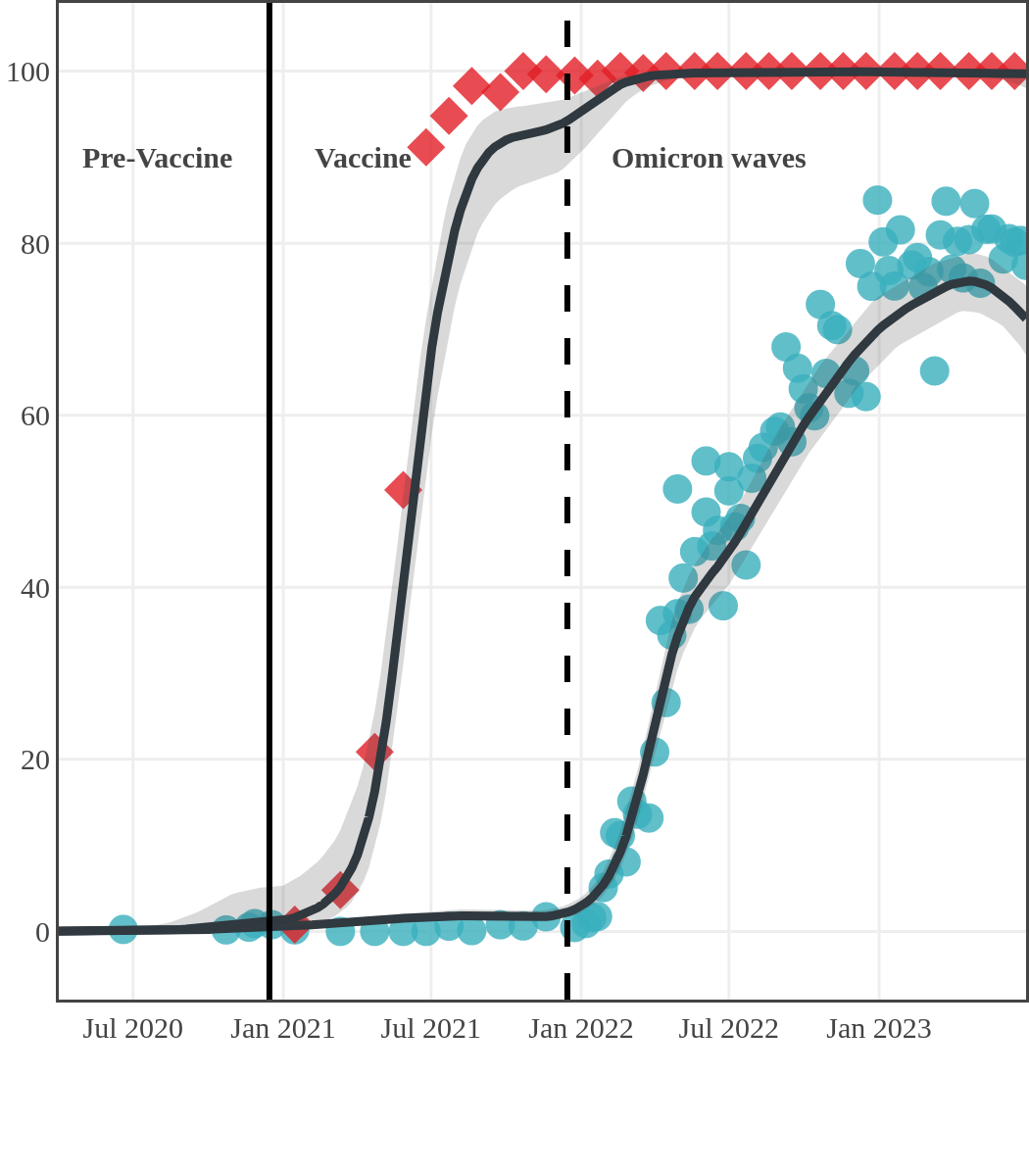 Seroprevalence due to infection by age in Canada 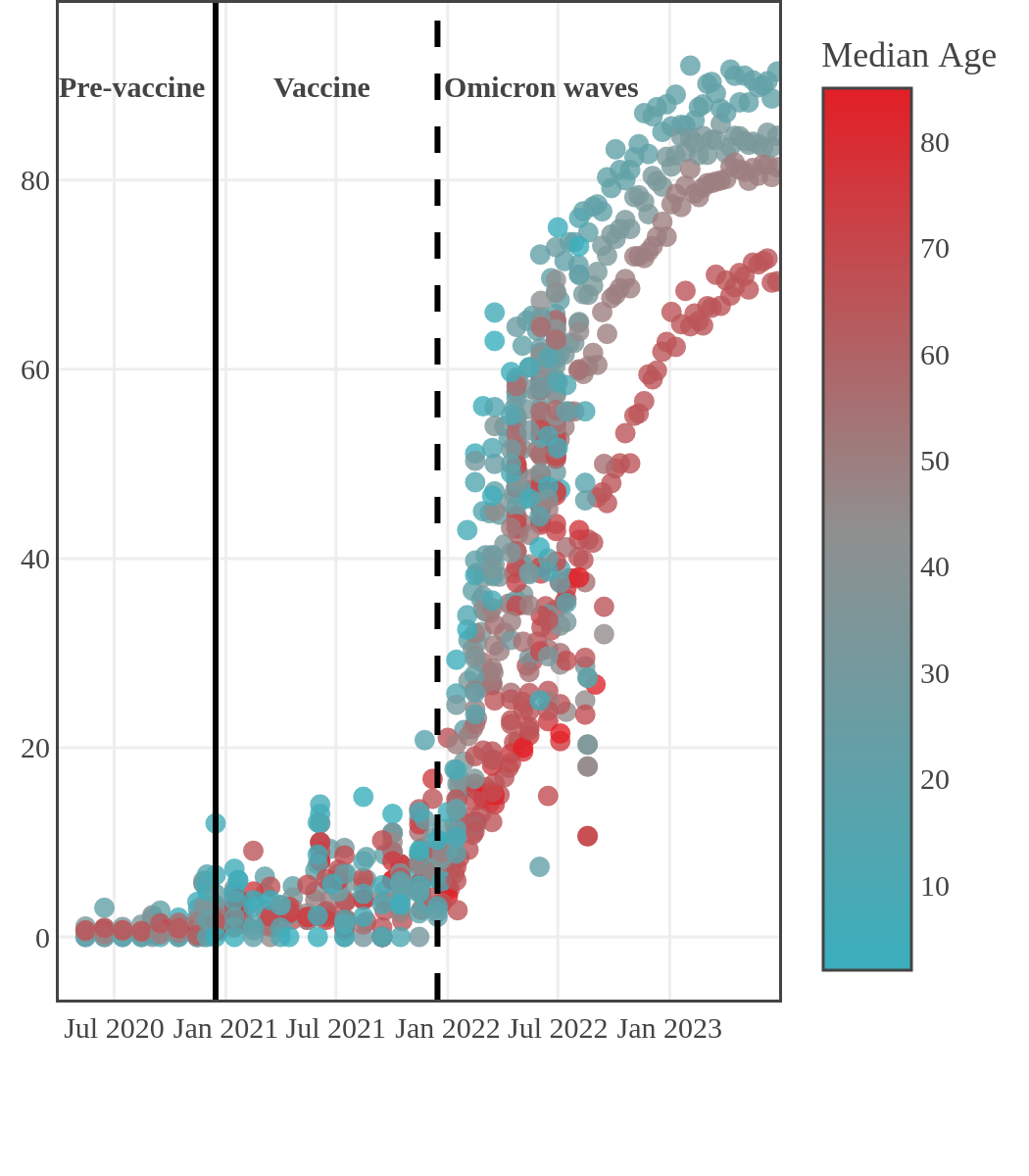 Data from Canadian Blood Services and Héma-Québec only

Infection-acquired seroprevalence over time in Canada: a detailed interactive graph

This graph amalgamates Canadian Blood Services data since the beginning of the pandemic. It allows you to view the rates of infection-acquired seropositivity according to material deprivation, racial group, and age, providing insight about the characteristics of who has been most adversely affected by COVID-19. Such data can assist officials and policy makers when they are deploying resources and can help address issues regarding access to public health, disseminating information, and ensuring equity for all Canadians.

Please click on the red buttons at the top, “material deprivation”, “racial group”, or “age” to filter the results. You can also double click on the legend to isolate a trace. 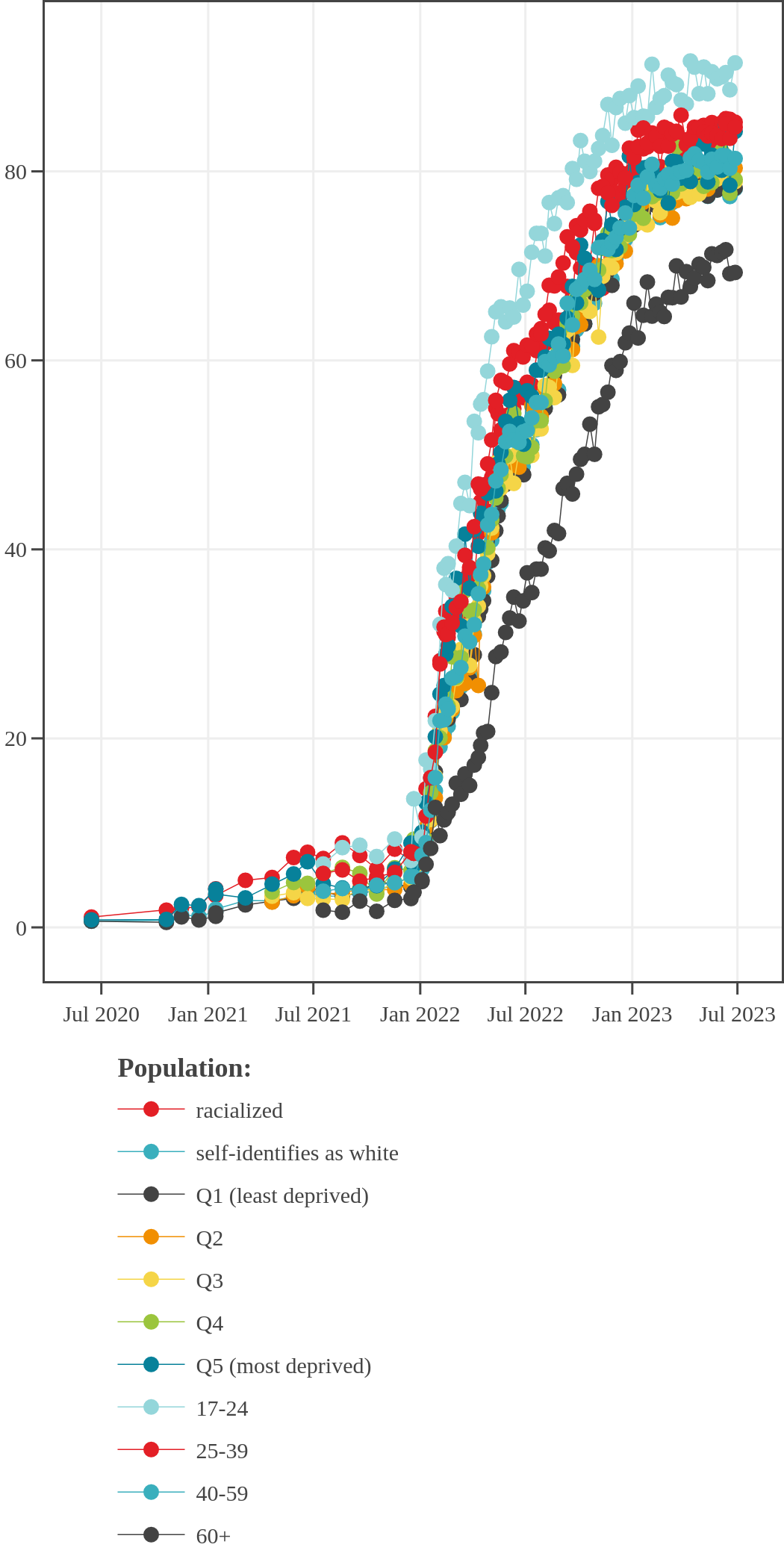 Seroprevalence by socioeconomic status over time

Canada (excluding Quebec and the Territories)

1 As measured by the Material Deprivation Index, which makes use of postal code data.

1 As measured by the Material Deprivation Index, which makes use of postal code data. 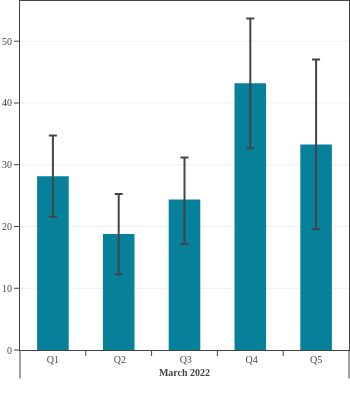 Seroprevalence by racial group over time

Canadian Blood Services data emphasize the persistent inequities in infection burden among racialized communities. Racialized groups continued to have a higher seroprevalence rate (78.7%) than self-declared white donors (68.6%) as of November 30, 2022.

Seroprevalence by race, month, and source of antibodies for Canada (excluding Quebec and the Territories)

Seroprevalence by race and source of antibodies for Quebec
January 25 to March 11, 2021

Looking for more of this data?