In a paper now published in Clinical and Translational Immunology, a team of Canadian researchers partly funded by the CITF and led by Drs. Anne-Claude Gingras from Toronto’s Lunenfeld-Tanenbaum Research Institute, Marc-André Langlois from the University of Ottawa, and Yves Durocher from the National Research Council of Canada, has developed a set of standardized, high-throughput serological assays to detect antibodies against SARS-CoV-2. Multiple serosurveys underway in Canada – including over half of those funded by the CITF – use this platform, making it possible to harmonize and compare their results nationwide. The authors describe their multi-faceted detection of the antibody response to SARS-CoV-2 infection and vaccination. 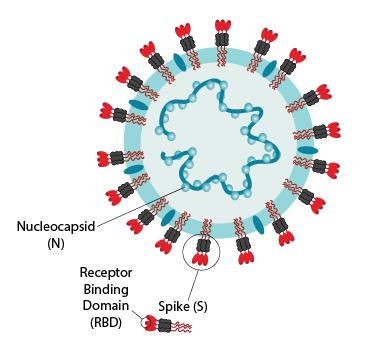 Figure 1. A SARS-CoV-2 viral particle with labelled nucleocapsid (N) and spike (S) proteins. The virus’ receptor binding domain (RBD), housed on the S protein, is also shown. The tests developed by Drs. Gingras and Langlois can detect antibodies against all three of these viral antigens.

This unique made-in-Canada platform enables the detection of IgG antibodies recognizing the SARS-CoV-2 spike (S) trimer, its receptor binding domain (RBD), and SARS-CoV-2 nucleocapsid (N) proteins (see figure below) as well as detection of antibodies that neutralize the virus. It has profiled over 150,000 unique samples and well over half of CITF-funded serosurveys use this platform. Most importantly, the harmonized high-throughput serological assays enable the comparison of data and aggregation of results nationwide.