Jeanie Quach2022-04-14T14:41:06-04:00February 9, 2021|International research review|
This evidence synthesis has been compiled by members of the CITF Secretariat and does not necessarily represent the views of all CITF members.

Viruses mutate naturally as they replicate. Generally, most mutations are not a serious concern for human health or public health strategies. However, during this phase of  the  COVID-19  pandemic, 3 specific  variants have emerged and are now circulating across the globe which are causing concern (1).

In the UK, the B.1.1.7 variant has emerged and appears to spread more efficiently than the original strain of SARS-CoV-2. The B.1.1.7 variant has a mutation in the receptor-binding domain (RBD) of the spike protein, and has been associated with increased transmissibility and an increased risk of death compared to other variants (2). Another variant known as B.1.351 (or 501.Y.V2) has multiple mutations in the spike protein and was first identified in South Africa. Finally, the P.1 variant contains three mutations in the RBD of the spike protein and first emerged in Brazil.

Scientists are currently working to understand how the variants may affect the efficacy of licensed COVID-19 vaccines. Preliminary studies by Muik et al. (3) and Xie et al. (4) reported no significant reduction in neutralizing titers from Pfizer- BioNTech’s mRNA vaccine sera at neutralizing B.1.1.7  and other N501Y variants. However, Wu et al. (5) recently demonstrated a significant reduction in the neutralizing capability of Moderna’s mRNA-1273 vaccinated sera against the B.1.351 variant. Another study by Wang Z et al. (6) assessed the functional capabilities of vaccine-induced  antibodies collected from individuals vaccinated with  either the Moderna mRNA-1273 or Pfizer-BioNTech BNT162b2 vaccine. A full vaccination dose induced robust levels of neutralizing antibodies, but neutralization capability was slightly, yet significantly, reduced against some of the tested variants (in particular, variants encoding the E484K or N501Y or K417N:E484K:N501Y mutations). Interestingly, nearly 14 of the 17 most potent monoclonal antibodies used as treatments against COVID-19 demonstrated drastic or complete reduction in their ability to neutralize viral variants expressing these mutations. This was also consistent with findings from Wibmer et al. (7) which demonstrated either complete or substantial reduction in the neutralization capabilities of three major classes of monoclonal antibodies against the B.1.351 variant.

Altogether, these studies demonstrate that while the vaccines currently approved still appear to remain largely effective against these particular emerging variants, monoclonal antibodies used in clinical settings may require constant evaluation as novel mutations and strains arise within the global  pandemic  landscape. Both Pfizer and Moderna are currently developing and testing booster vaccine formulations to address some of the variants of concern. 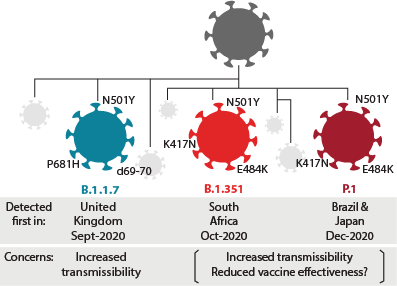 Figure 1. Recent rapidly spreading variants have been observed globally.  Some mutations confer potential selective advantages to the virus, such as increased transmissibility or immune evasion. Rise and spread of mutations need to be monitored carefully.